Ambient Air Pollution Control is a relatively unknown term in India outside of the Air Pollution Control Industry and stakeholders. Due to the invisible nature of air pollutants, this term has gained prominence through the National Clean Air Programme (NCAP) designed by the Government Of India that targets a 20% - 30% reduction in Particulate  Matter levels across 5 years. The drop was recommended by a National Green Tribunal that identified 122 non-attainment zones in the country that did not meet the air pollution control standards stipulated by the Central Pollution Control Board.

With the focus on outdoor air pollution across cities and its multiple health hazards to children and humans in general, few technologies have come about in this space aimed at cleaning ambient air for the citizens. However, they are being deployed across several sources of ambient air pollution like construction, roads, waste management, municipal infrastructure, and industries that contribute to this menace.

While the NCAP aimed at first monitoring the air quality of cities, several monitoring companies and sensor-based technologies gained centerstage. However, the next big play is in mitigation technologies and these are here to make a huge difference as they solve the problem of air pollution outdoors.

Below are some technologies focused on ambient or outdoor air pollution
control: 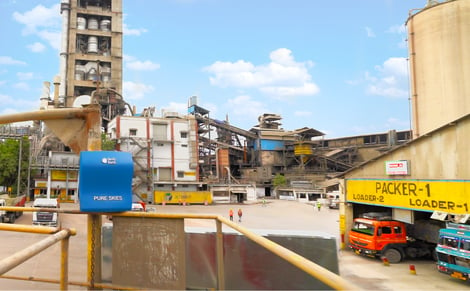 Devic Earth is a green tech company launched in 2018 in Bengaluru after 10 years of research into their flagship air cleaner, Pure Skies. It works through unique Pulsed radio waves technology. A network of devices can cover the desired area. Pure Skies, when plugged in, emits radio waves into the air in the 2.5 GHz spectrum that causes the invisible PM2.5 and PM10 particles present in the air to have a temporary charge bringing the negative and positive ions present in the particle together. This induced charge causes the particles to become heavier in size and fall to the ground, accelerating the natural process of the clearance called Dry Deposition of particulate matter in the air thus reducing PM2.5 and PM10 by 33-90% in 3 months to 6 months. It is important to note that the NCAP outlines a 5-year timeframe for the achievement of a 20% - 30% reduction. Pure Skies addresses air pollution in large areas. The device does not use filters and can address a radius of up to 3 kilometers with a few devices, and comes with zero maintenance. The only demerit of Pure Skies is that during negative or very low temperatures, efficiency may be altered leading to a slower rate of deposition. The company works with smart cities, and industries and is emerging as the most successful technology for ambient air pollution control.

Since Pure Skies addresses large areas of coverage without the use of filters or other expensive equipment, it is a low-cost and convenient option. It offers the least cost for such large area coverage, among other commercial air cleaners, including smog towers and other filter-based equipment, simply because it removes the hassle of replacing filters and maintenance costs. Pure Skies is ideal for businesses, industries, and governments. The company is also working with leading IITs to validate its results across a smart city installation and has received favorable results in its initial phase. 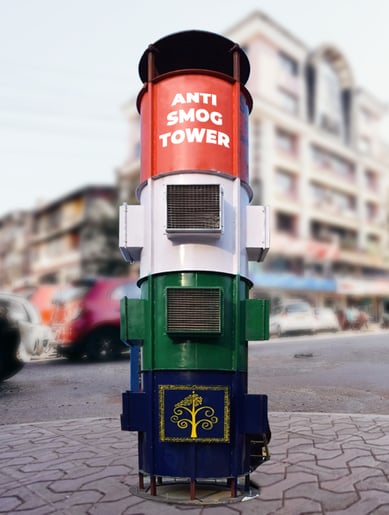 Smog Towers have been used in some of the leading cities in North India like Delhi and recently an Air Purification Tower was used in Chandigarh. Owing to the notorious winter pollution during the stubble burning and Diwali season in the NCR region, Smog towers are installed at certain locations throughout the city. Smog Towers work on the principle of Indoor Air Purifiers that largely rely on HEPA filters and air ionization technologies to remove particulate matter from the air. Several layers of dust pass through these filters that absorb the pollution and release clean air. Several towers were installed and backed by prominent personalities in the NCR region. A 20-feet tall tower can cover anywhere between 50-500 meters radius. This is a huge downside to this costly technology that works on extremely high capital expenditure of up to INR 20 crores and an unjustifiable recurring cost of filter replacement which makes this unsustainable for lawmakers and industries. 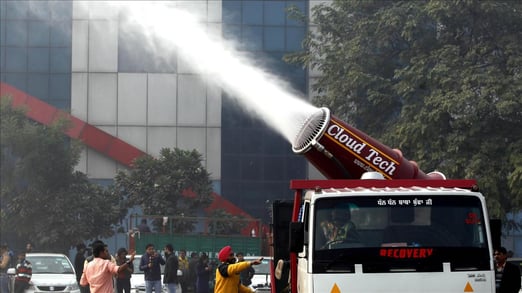 We recently saw anti-smog water guns being sprayed into the air during the Supertech Twin Towers demolition in Noida. About 4.5 million liters of water were used in this demolition as per a current official update. Anti-Smog water guns create a rainfall effect scientifically known as Wet Deposition causing visible and invisible dust to fall to the ground. The technology is unsustainable due to the amount of water needed to run this massive scale of operation 24*7 and meaningfully contributes to air pollution control and protection especially as India moves towards its Net Zero goal. 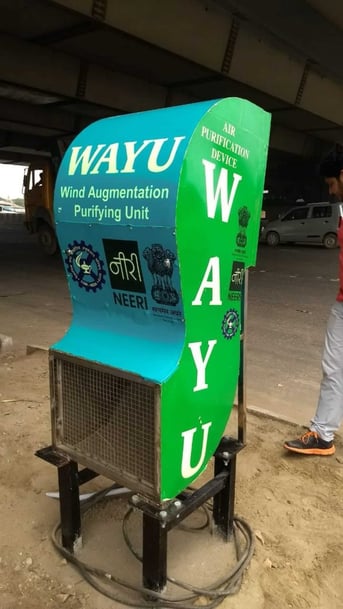 Wind Augmentation and Purifying Unit WAYU use filter systems to clean air outdoors. The devices can clean 2,500m of air per hour and cover 20 meters around the area, totaling 500 meters cumulatively. These require constant operating expenditure for the replacement of filters and are usually routinely monitored and serviced. However, this technology is yet to be third-party certified in most installations. However, some of the results from independent NGO-based research prove to be effective in the installation that happened in the Gurgaon region in 2021. The downsides of this technology include the regular need for maintenance, vandalism, and lack of effectiveness of filter-based principle for ambient air purification. Back in 2018, when these filters were installed in Delhi, people used them as dustbins, stubbed cigarette butts, stuck chewing gums, and also spat on them. This was not a positive experience for the citizens and the company behind these was forced to upgrade the design and look for affirmative action steps to ensure this does not happen again.

In conclusion, to address the problem of ambient air pollution control in India, we require solutions that are sustainable, low-cost, hassle-free technologies with high efficacy, which can cover large areas, and that is low maintenance.

The new emerging technologies are sustainability-focused and cater largely to the major problem of ambient air pollution. The new pulsed radio waves technology, for ambient air pollution control, is completely safe for humans, flora, and fauna, and comes closest to this criteria, and is fast emerging as the winner!

(The authors work at Devic Earth, a leading air pollution control technology
startup that has delivered 20mn sqm of clean air in the last 4 years.) 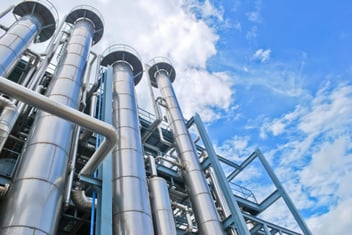