How Does Pure Skies Work? 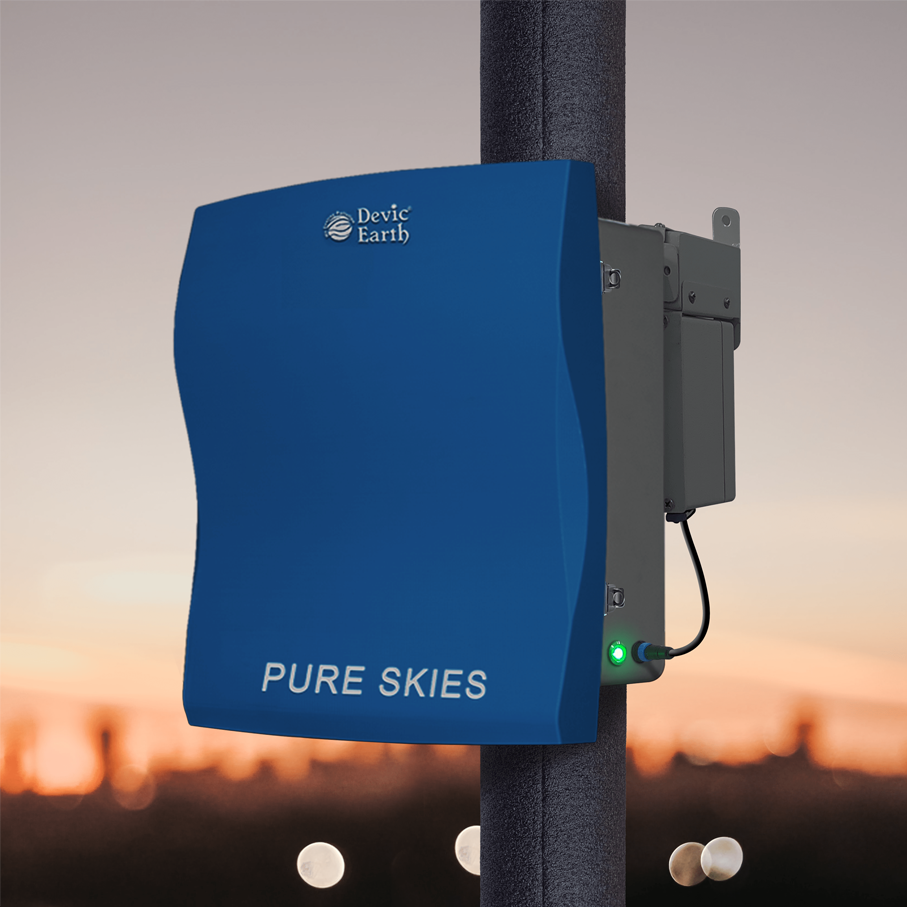 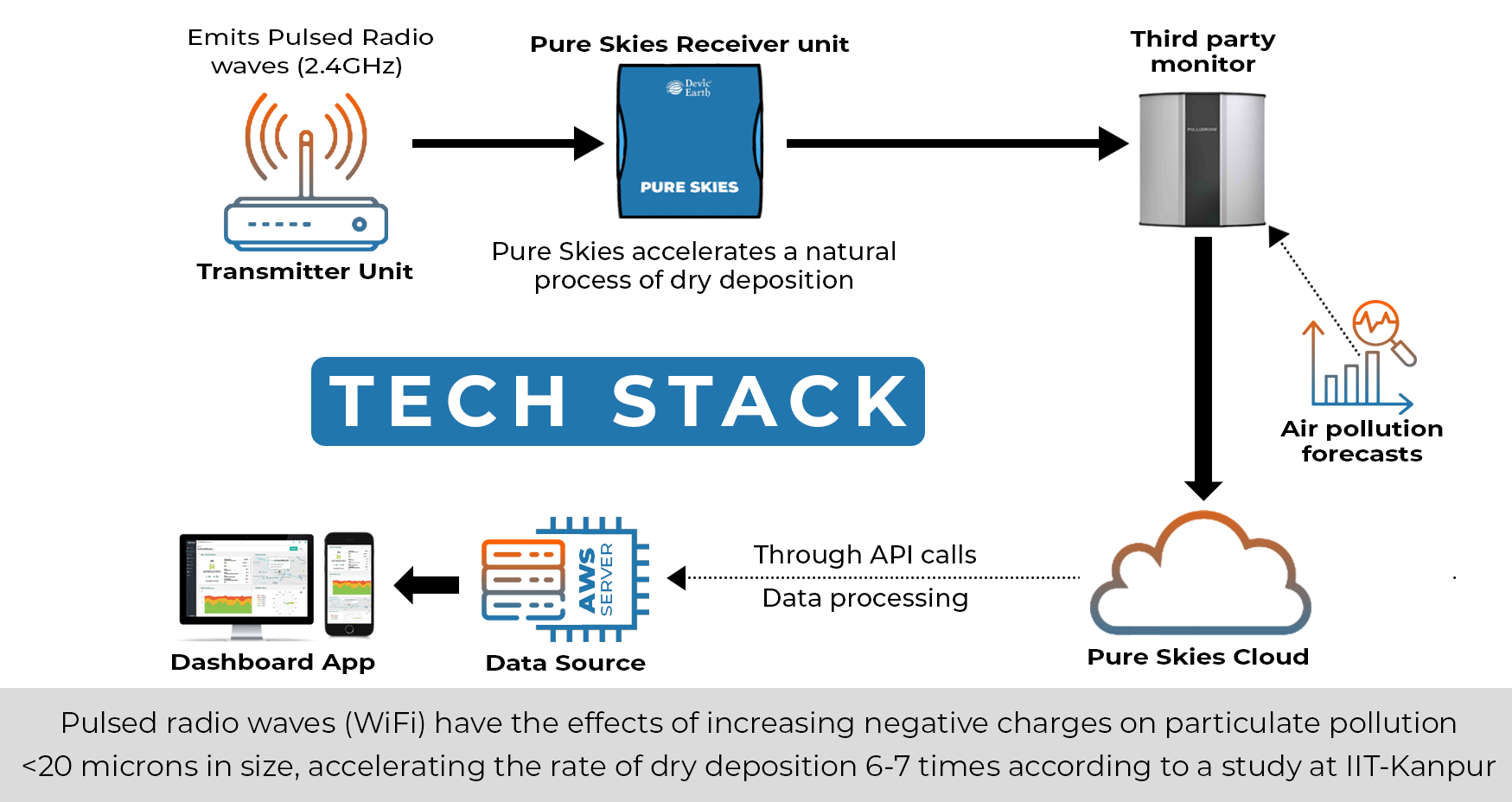 Let us break that down for a better understanding.

Have you ever felt your pulse or observed your heartbeat? If you have, you would have noticed a rhythmic rise and fall. The radio waves we use to clear pollutants behave in a similar manner – which is why they are called ‘pulsed radio waves’.

Pulsed radio waves are periodic bursts of radio waves or radio frequency energy (RF). The pattern of these bursts depends on the desired effect.

This is unlike the radio wave transmission from telecommunications equipment such as Wi-Fi or mobile towers which are usually continuous in nature. Figure 2: Spectrum analyzer image of pulsed radio wave transmission from a Pure Skies test unit (for demonstration purposes only; not the actual pulses that are used in the field).

Pulsed RF energy has been used for several decades in certain wastewater treatment systems, in magnetic resonance imaging (MRI) for medical diagnosis, and radiofrequency based procedures in cardiology and interventional radiology to treat heart rhythm problems, tumors, and other diseases.

Invented in the ’90s

Pulsed radio wave technology for pollution control was developed in 1992 to mitigate certain pollutants in wastewater and sewage. More rudimentary applications using static electromagnetic fields have been in use since the early 1970s and was first patented by Meyers et al in 1973 (U.S. Pat. No. 3,753,886).

Since many impurities in water exist in ionic form, they are significantly affected by electromagnetic fields and charges placed in the water. That is what helps pulsed radio waves purify water. It can be used to accelerate sedimentation and sludging in wastewater treatment tanks. However, this approach was largely abandoned due to the high amount of energy required. This was owing to the use of rudimentary pulse patterns at the time.

Laboratory and field data suggest that Pure Skies accelerates the clearance of certain pollutants in the air, primarily through dry deposition.

What is Dry Deposition?

Dry deposition is the settling down of pollutants (including particulate pollutants and aerosols) present in the atmosphere onto a ground-level surface. Most often, this deposition is absorbed by the soil or vegetation.

Dry deposition is responsible for the clearance of 50-66% of pollutant particles in the atmosphere.

Figure 4: A graphical representation of the natural process of dry deposition of particulate matter occurring in the atmosphere.

Figure 5: Under the influence of Pure Skies technology transient weak dielectrophoretic forces are created, which accelerates the particulate matter causing them to collide with one another, agglomerate, and clear out from the atmosphere, faster.

Dry deposition happens 24x7, both indoors and outdoors. A common example of dry deposition that we are all familiar with is the layer of dust that settles on the surface of your car if it is not washed for a few days.

Figure 6: An example of dry deposition in action. Dust settles on an unwashed car left outside over a period of several days.

In air pollution control, several technologies utilize the basic principles of agglomeration and settling – two actions that are a key part of dry deposition – to accelerate the clearance of particle pollutants in flue gases emitted from industrial processes. Gravitational settling units (by gravity), electrostatic precipitators (by ionization), and cyclone dust collectors (by centrifugal force) are common examples in everyday use.

Based on laboratory data, the pulsed radio wave technology creates a weak electric field that affects particle pollutants of very small size (lab tested up to 20 microns in diameter), resulting in the formation of temporary dipoles.

Active research to validate this is currently being pursued through research collaborations with academia.

What about scientific publications?

We are pleased to report that we have submitted 2 scientific manuscripts to international peer-reviewed journals for publication. Details from this work will be shared after the manuscripts have been officially accepted and are formally in press.

Pulsed radio waves have little effect on particles larger than 20microns in diameter. These particles are simply too large for our technology. Visible dust, pollen, coke dust, and volcanic dust larger than 20-30 microns are not affected due to their large size.

Figure 7: Size of particulate pollutants affected by Pure Skies. In general, particle sizes smaller than 20-30 microns are affected. There is insufficient data on viruses (e.g. coronavirus) to make any recommendations.

Certain gaseous pollutants (sulfur oxides, nitrogen oxides) are reduced, mainly as aerosols. However, the degree of reduction (20-30%) is not as great as what is achieved with particulate pollutants (PM2.5: 50-60% outdoors; PM10: 40% outdoors).

There is no data on Pure Skies and coronavirus.

Do the pulses vary?

The pulse sequences vary according to the pollutants addressed (PM2.5, PM10, etc.) and the environmental conditions (low temperatures, high humidity).

The specific pulse sequences that are used for a customer’s location are determined by our AI-powered smart technology. This considers air pollution data from our 3rd party monitors (supplied with each Pure Skies unit), local conditions such as traffic density, the number of workers at the site, production capacity, and type, and meteorological factors including wind speed and direction, temperature, humidity, and precipitation. Regional factors such as crop burning and forest fires are also considered.

What frequency is used? Is it safe?

All commercial Pure Skies units work in the ISM frequency band similar to the Wi-Fi spectrum (2.4-2.5 GHz) and power levels are maintained under standard regulations. The World Health Organization has stated that there are no adverse health effects from Wi-Fi.

What is inside a Pure Skies unit?

Each Pure Skies unit uses a custom-made omnidirectional antenna (EIRP < 100 mW) which has been tested at multiple facilities, including ITI Labs, Bengaluru (a national level testing facility), Indian Institute of Technology Madras, and other institutions.

Other accessories include an IoT hardware system and Power Source.