I woke up to an ominous red sky in San Francisco on the 9th of September.

The entire horizon glowed orange, and the air was toxic.

We had to keep our lights on throughout the day because it seemed like nighttime and keep every door and window shut for a whole week to maintain safe air quality levels indoors.

All this, compounded by the pandemic, resulted in an overhang of insecurity, fear, and paranoia.

People all around were experiencing claustrophobia, suffocation, and poor mental health among many other issues.

This was, by far, one of the most surreal experiences of my life.

How did it happen?

The occurrence was a combined outcome of raging wildfires in the San Francisco Bay region and heavy winds that had blown smoke and ash from the wildfires of Northern states like Oregon and Washington.

The wildfires were caused by several lightning strikes during a massive thunderstorm in the San Francisco Bay region on the 15th of August 2020.

Extreme heat, freak storms, and climate change, of course, set the backdrop for the wildfires this year.

The state of California has been in a megadrought for over two decades now and it experienced a record-breaking heatwave in August, with temperatures reaching three digits over several days.

This has caused the forests and grasslands to dry up, making them more susceptible to wildfires.

According to Cal Fire, 3.2 million acres of forests have turned to ash this year, with four more months of wildfire season to go.

Already more acres of land have burned in 2020 than any year on record in California.

It is an unprecedented event in both scope and scale.

Several of these fires have resulted in “fire tornadoes,” and wildfire plumes rising more than 10 miles high, creating a giant suffocating cover of cloud and ash, extending more than 1,000 miles over the Pacific!

There have been numerous fatalities, 4,200 structures destroyed, with close to 16,000 firefighters deployed across the entire region.

The impact of climate change is now being felt widely across California and other regions along the west coast. The weather in this region has become more volatile, resulting in rising temperatures, drying up the green cover even more.

Further climate change could only damage these ecosystems even more.

Scientists have found that the odds of extreme weather triggering these wildfires have increased by 30% since 1900.

Fire conditions like these years are at least four times more likely than they were at the start of the 20th century.

While wildfires have been recorded in this region since the early 1930s, they used to recur once every decade or so. Since 2003, they have become an annual occurrence.

Human contributions to the wildfires include events like parties, where fireworks are deployed that can trigger ablaze, and the warming that has been caused by greenhouse gas emissions.

Towns and residential developments being built increasingly close to dry forestland have also exacerbated the issue.

The combination of ash and smoke has rendered the air quality in the west coast region extending from California to Oregon extremely toxic.

Ash carried by the wind gets deposited on surfaces both indoors and outdoors. When cleaning up, these fine particles become airborne again and can be inhaled.

This gives rise to serious health issues both in the short-run and the long-run.

With the fire season extending over even more months, the problem of acute air pollution is significant and can no longer be ignored. Both the outdoor and indoor air quality has been compromised as a result.

In my own experience, since I had started visiting this region regularly from the early 2000s, the air quality has become disturbingly poor during the September-November season.

The state of California that prides itself on clean, sustainable living initiatives for its people has to definitely pay attention to this threat of burgeoning wildfires.

While there are many efficient air purifiers available that take care of the indoor air quality, a technology that could address the outdoor air quality across large areas is the need of the hour.

In this regard, Devic Earth can be of great help with the Pure Skies air pollution control system that provides a perfect and secure solution for this problem.

Pure Skies is a comprehensive solution for destroying both indoor and outdoor air pollution, with a single device enabled to clean up a large expanse of space- in fact, more space than any other solution in the market today!

With air pollution raging in the region right now and even more expected in the months to come, it is our hope the responsible citizens of California, Oregon, and Washington will call on our services to help them keep their air clean. 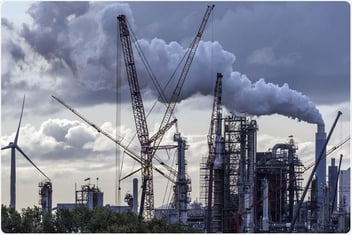